It would be good if you could please recommend a game or two for me.

[Edit: I've looked some more. I've found Tux Rider, which you can control by tilting your device. But I didn't enjoy it that much. I've also found ARTetriCAN, but I don't yet know whether or not it supports monochrome printers.]

I'm afraid I don't have experience with any others. 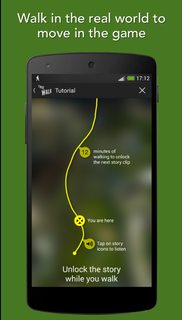 It's backed by the NHS and the UK Department of Health. The basic premise is:

A bomb explodes in Inverness station, and you’re given a package that could save the world. To stay alive, you’ll need to walk the length of the UK. The Walk is more than just a great pedometer/step counter — it's a way to turn walking into a journey, a challenge, and a rip-roaring adventure.

It's a less intensive alternative to Zombies, Run! but still does require quite a bit of moving about. You'll can use this to make journeys you already take a bit more exciting.

It's supposed to launching on iOS in Spring 2016, with an Android release a bit later. It sure does look good though.

It's not available yet (still in alpha) but it sounds pretty exciting. Sort of a mash of Ingress and a RTS. It promises to be open-source as well.

Enklave is a game that takes you away from the big screens of your console or desktop and encourages you to walk around your physical surroundings. Your mobile device becomes a window into a post-apocalyptic alternate reality. You participate in extending the Enklave world by scouting out real life buildings which function as shelters (enklaves) for the remaining survivors within the game. In a departure from similar games which make gameplay tedious, Enklave is designed to automate the trivial tasks and let you focus on the important tasks without staring at the screen all the time.

Pokemon Go is now available in most places in the world.

It is an extremely popular game based on your real life location. You need to go looking for Pokemon to catch and for Pokestops to refill your items.

There are also gyms scattered around which you can battle in.

Eggs are speed sensitive so you must walk in order to hatch them. Getting to gyms and hunting Pokemon can be done easily via any other means of transportation.

If you have a Fitbit, you can try FitRPG which aims to "gamify" Fitbit.

There are several different apps which are similar to FitRPG (such as StepBOT) in that they work with your Fitbit's step count. You use your step count to advance your character in the game.

Project Tango is a smartphone and tablet project by Google.

The "Project Tango" is an Android smartphone-like device which tracks the 3D motion of the device, and creates a 3D model of the environment around it.

The device would come with a 7-inch screen, two back cameras and infrared depth sensors.

On 28 May 2015 the Tango tablet became available for purchase via the Google Store.

Not the answer you're looking for? Browse other questions tagged gratis android game fitness or ask your own question.

1
Android-Windows 8: What software do you recommend to screencast playing a game?
18
Remotely administrate Android devices in the same network (no cloud!)