I need to record sounds emanating from mechanical equipment. These sounds occur randomly every few hours and only last approximately 1-3 seconds.

To accomplish this task, I need an audio recorder that is constantly running, but that only records when audio is present. There are many audio recorders that are "voice activated", but I have not found any that will work because by the time they activate, the sounds I am trying to capture have concluded.

To accomplish this, I need an app that continually records, but only keeps audio from "sound activation minus x seconds". It is no problem if 'x' is fixed.

Update: Congrats! I have awarded the bounty to @4mohit for his/her answer. I'm still performing testing to see if it works reliably for my task. Thanks also to Steve Barnes for his creative answer.

Since I'm still in the testing phase, I am open to more answers. I will post more updates as testing progresses.

If you are looking for a voice recorder that can record audio continuously and skips the silence and can run for 4 hours unattended, then I think you should look into Smart Voice Recorder. It meets your requirements of,

From the description in the Google Play store: 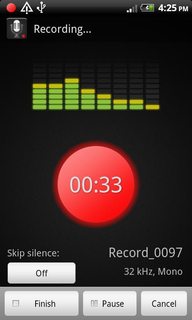 Smart Voice Recorder designed for high quality long-time sound recording with skipping relative silence on-the-fly. For example, you can use it for record night sleep talks (or snoring:)), business meetings, a regular day of your babysitter, how you sing or play the guitar and so on. It's fantastic! And you may use it as regular voice recorder with simple and nice user interface. Give it a try! :)

NOTE: This app is not call recorder. May not work properly on some handsets. User interface not optimized for tablets yet. Recordings in this format cannot be sent via text/sms/mms. Please feel free to send me feedback via email if you have any.

Permissions that this app needs are:

If you can use a laptop rather than a mobile then you could do this with python + pyaudio. The Record sample looks like:

But you could quite easily modify this to check if the sound levels have passed a given threshold and if it has been exceeded to record the current set of frames to a file named for the time & date.

Determine if the sound level has exceeded a given threshold should be as simple as:

but I would consider using a dqueue to store your frame and once the length of the frame is reached, pop a chunk from one end before pushing to the other, if you are recording save the chunk, otherwise pop and discard. You could then when getting each chunk just check the max of that chunk and if it is over the threashold set a counter to the size of the frame plus the desired overrun and if there is no current open wave file, open one with the name based on the time, if there isn't one decrement the counter if it is over 0 and write to the file, when it reaches 0 close the file.

Python can also be used to plot and analyse the resulting files as in this blog.

just use Automatic Audio Recorder it have everything you're looking for including automatic record when there are some noise. 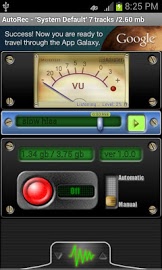 5
Software to remove all empty space from an audio recording