I'd like to create a few tutorials for KiCad, which fortunately is fairly portable, so this will work on Windows, Linux or MacOS X.

The program extensively uses hotkeys, so just looking at the screen capture is going to be confusing -- while I could go through the menus everytime, that is fairly tedious, and I'd like to show the key bindings.

At the same time, mouse clicks and dragging are important, obviously, because most things happen on a canvas, and it is not immediately obvious whether the mouse was clicked or dragged, and whether any modifier key is being held down.

Thus I'm looking for a program that records the mouse and keyboard input along with the screen contents, and lets me visually represent these in the final video.

I'd be inclinded to use an independent app to render which key you are pressing on-screen, then just screen capture both applications.

So on Windows, maybe one of these existing answers will suit you?...
Windows utility to render which key I am pressing on-screen

...and I've used Apowersoft Free Screen Recorder (desktop version) for screen capture. It does have appropriate ways of animating what the mouse is doing... 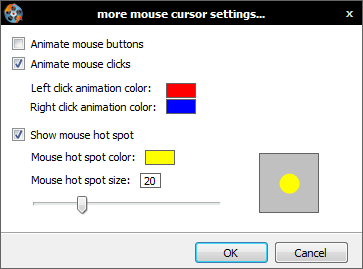 ...but I couldn't say how good a choice it was, only that it got the job done for me.

Not as pretty as you may be looking for but you could possibly, on Windows, use pyhook, if you follow the example in the source code you should be able to display all keyboard and mouse events, including modifiers, as text in a command window. If you are using a screen recording tool that records the entire screen then your viewers will at least be able to see the key presses & mouse operations with the modifiers.

There is an article for 7 programs that do this that came up with a simple search: http://www.lassanamagassa.com/2014/09/7-apps-that-display-real-time-keystrokes-on-a-windows-pc-screen/

The first program that came up is called QiPress v1.072 So I went with that and it does everything you want lol.

It shows words you type, key strokes, clicks, whether you are holding the click and which mouse button it is. It also includes what locks (num, caps, scroll) is on all in a little box in the bottom left hand side of the screen.

Keyboard Jedi worked for me on PC for displaying key presses http://dl.dropbox.com/u/11163041/keyjedi-Win7-64bit.zip

There are plenty of screen capture tools on Windows, but Camtasia must be the most popular and likely one of the most powerful ones.

Not the answer you're looking for? Browse other questions tagged windows linux screen-recording or ask your own question.

7
capture the screen and capture via laptop video
3
Screen record and mouse tracking
1
Screen video and audio capture library for .NET
4
Screen capture software for streaming video
1
Screen and audio capture software
6
Windows Software to constantly record the last X minutes of desktop activity
0
How to map a modifier key + key to a single key? (example: Shift+M2 to E)
0
How can I move the mouse with just a physical keyboard?