I have been using GitHub to coordinate development of scientific computing software. The developers I work with are awesome and can manage servers, code in anything, etc (e.g. we host Redmine, developed web-apps, run supercomputers) but I am looking for something that is easier than using two tools in parallel.

I have a new project manager who requested two features that GitHub does not natively provide: a Gantt chart view and the ability to create issue dependencies. The PM currently uses and has licenses for Smartsheet and and Microsoft Project, but all we need is the Gantt Chart and issue dependencies.

I've searched google for search terms such as 'github gantt integration' or 'github smartsheet integration' and come up with a handful of integrated apps. A year ago I looked for a scrum-board integration with GitHub and found Hubboard, Waffle.io, and a few others. These are great, but don't add the above features. Moving away from GitHub is not an option.

I've seen tools that couple existing applications, such as IFTTT (If This Then That), but I don't know where to start.

I've also seen some scripts for visualizing a Gantt Chart in R, JavaScript, and Python. However, these are plots, not visualizations.

For issue inter-dependency, GitHub has a hierarchy of milestones that contain issues that can optionally contain tasks. This works for me, but does not provide the requested ability to mark an issue as blocking or being blocked by (or preceeds / follows).

I've recommended Trac a couple of times here for project management. It's an open-source project management tool for self-hosting written in Python, supported by tons of plugins – a.o. all you named in your question:

Plus all it's "elements" are connected: you can refer to a commit from wiki/issue and vice versa, even embed code-pieces (taken from the repo "live"), charts etc. in wiki pages. Or have it draw a "ticket dependency tree", visualize your code repository ("commit tree"), and more. Many of its graphical processing (e.g. dependency visualization) is done using Graphviz.

To give you a better idea of what to expect, matching your listed requirements: 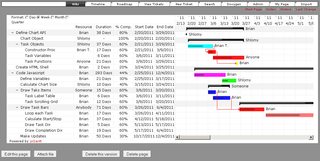 Not the answer you're looking for? Browse other questions tagged web-apps project-management github or ask your own question.

2
IT Team Management and Monitoring
0
With which tool I can draw version control(git) graphs?