Is there a good GNU/FOSS alternative to Tableau?

Tableau is a piece of software which allows you to connect to heterogeneous data sources (files, SQL databases, etc) and quickly combine data in different views and create visualizations and reports from that data. It can be run as a desktop application or server; in this case I'm mostly interested in equivalents to the desktop version.

A few months back a new big boss was hired where I work. The big boss prescribed Tableau as the cure to our ills -- to speed up the rate at which we produce analyses and to make them more visual.

Now, everyone is obsessed with Tableau and everyone uses it. Except me. Why? Because they decided that I know a lot about the R language and they don't want to pay for another license. So I'm stuck with R and Microsoft Office while everyone else uses Tableau and thinks that anything done in Tableau is automatically awesome.

The good news is that they give me admin rights on my computer, so I can install anything I want... which leads me to the question of what's the best GNU alternative to compete with Tableau at providing a meta-interface to different data sources, visualization, and hopefully also an interface to R?

Thanks for the question. I too have spent a lot of time handcrafting reports and was exposed to Tableau when others at a previous employer used it. I downloaded the trial, worked my way through the tutorials and was impressed at how much can be generated, how quickly, with little technical expertise.

Of course, there will always be some reports that we have to handcraft and the question is how to fit Tableau in with our existing applications / handcrafted reports.

For standalone solutions, with no code of mine, I have been using 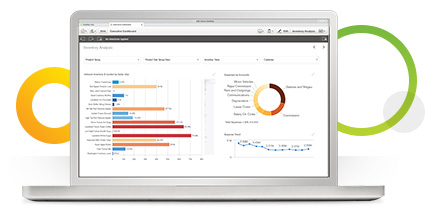 That "Free for personal and internal business use" is actually quite generous, but might be a problem if you have to release reports to external companies.

For client side code-your-own, I think that you can't beat http://d3js.org/

I don't think you have the right approach. You are supposing that an exact clone of Tableau is the best answer. It might not be.

Notice that if Tableau (which I don't know and don't care about) was only running on Windows and you'll have been given a Mac (under MacOSX) you'll have a similar problem.

And it is not a matter of money (in other words, free software is libre, not gratis software).

First, you have skills that your other colleagues don't have: you know quite well R and you are versed in Linux.

Then you have to tackle (or perhaps) some problems using your expertise. Define the classes of problems you need to solve, think about the tools and libraries (in particular, interfacable to R) you are familiar with or can learn easily. Be aware of the inputs and outputs required from you. Do you need to produce some Tableau compatible files, or what? Or are you simply asked to produce documents (e.g. in PDF)? What kind of data, and what data format, are you supposed to get or to produce? Are the data formats well defined/documented...?

Do you have more (or do you want to get easily) general programming skills or scripting skills?

Do you have a good understanding of what Tableau is? Of it's shortcomings?

I certainly don't, and I don't even want to spend a few minutes reading their commercial ads.

Linux is quite powerful in combining tools and libraries (e.g. using a software pipeline). For example, you might write some Python script fetching some data from databases or structured web services and processing them in some numerical library glued to Python, put them into something easily processed by Scilab or R, and use GNUplot to generate an output which would become a figure in your LaTeX document.

So Linux (with the many free software available on Debian) is already providing "a meta-interface to different data sources, visualization, and R". You just need to define more what that really means.

Think more in terms of data flow, workflow, data formats, data transformations (and of course in terms of your own skills), software libraries. You'll pretty soon (in a few weeks) be able to show -in a few days- some work that your Tableau colleagues won't be to do even after clicking during a month on their Tableau desktop. Expertise is more important than tools.

R (which I don't know) is rumored to have a considerable amount of glue code to a lot of powerful libraries. AFAIK, fetching data from web sources or databases is a piece of cake for R (there are already several interfaces in R for that).

Not the answer you're looking for? Browse other questions tagged database data-visualization data or ask your own question.