All that I'm asking for is a place for me to copy my text selections over, so text from difference sources can be gathered into a single place and maybe rearranged, and edited a bit. That's it.

Does such simplest Notepad App ever exist? And most importantly, it has to be ad-free, because the least thing I want when organizing my thought is those flashy ads that try their best to grasp your eyeballs.

UPDATE: Well, after my first post, I made my last attempt to find it myself, and found this,

Fast notepad
https://play.google.com/store/apps/details?id=com.taxaly.noteme&hl=en
The simplest in the world notepad. Nothing extra, no ads, loads instantly.

That looks good, but last update was over two years ago, on February 17, 2013. Is there anything better than this?

EasyWriter+ is actually a small, fast Markdown editor for Android, but easily meets the specifications OP supplied in the original question: 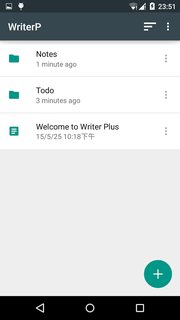 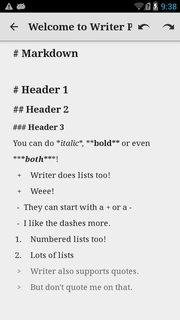 I've been using it for a few months now, and am very happy with it.

Google's own Google Keep app could be what you're looking for. Very simple (basically just copy/paste/edit and little else) and all notes can be easily synced with your Google account.

One drawback is that it doesn't directly open/edit text files, you have to type the text yourself or paste it in a new note.

In addition to Keep, other applications you should consider are Evernote and Microsoft's OneNote.

Both Evernote and OneNote can function in stand-alone as well as syncing across platforms. Keep's advantage is that your Google login is also your Keep login. OneNote login is persistent as it is your Outlook.com or live.com login. I have found syncing OneNote at work to be problemmatic as that installation of OneNote insists on authenticating with Active Directory (AD). I haven't spent the effort to overcome that speed bump as Keep does the same with out AD. So I use Keep for notes I need for work. However, I like to separate my personal data from my work data (a lesson that Hilary Clinton has learned the hard way). Thus the inability to synch OneNote at work is a blessing as it reduces the likelihood of spillage of personal data into my employer's systems. Evernote login was also a chronic speed bump making synchronizing was a hassle.

UPDATE: For the simplest one, I was settled with the following, but now found it is not ad-free, and have other issues. So thumb-down on it.

Note Pad is a simple notepad application for Android.
It's beautiful, minimalist yet powerful notes taking app that work on all Android devices with android version 2.2+.

It's a beautiful text editor that saves to plain txt files.

JotterPad — Writer is the next-generation plain text editor engineered for Creative writing. It is perfect for writing novel, lyrics, poems, essay, draft and screenplay. The clean typing interface allows you to focus on writing, shaping your thoughts into text. Go about your creative writing without distractions and write to your hearts content. 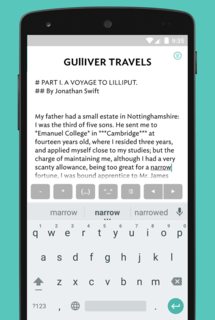 FTA, I am now settled with the following,

It allows me to,

and most importantly, I found sharing to the social media is most convenient, especially when composing long messages, when you will no longer be confined to that tiny window normal social media app provides.

As of September 2018, it's now off the shelf of google play. But IMHO it is still the best (1) simple (2) ad-free Android Notepad App, and available from the internet:

Not the answer you're looking for? Browse other questions tagged android text-editor note-taking or ask your own question.