Persistent CSS Element editor for Firefox? (like Stylebot for Chrome)

Chrome's Stylebot allows you to right click any item in the page, and automatically create a CSS rule for that element. I'd like to have the same for Firefox.

I've tried Stylish, but it adds so many annoying steps, since I have to "Inspect Element" with the default inspector, then figure it out how to call it in the CSS, then in the CSS fill everything manually …

Look at a couple of Stylebot screenshot to get an idea: 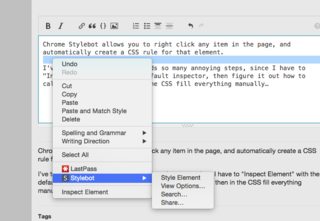 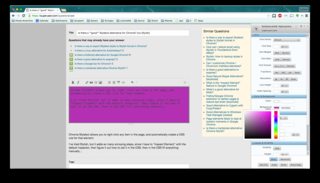 It allows you to edit stuff live and see the preview while you're editing.

It doesn't have to have all the fancy visual options as Stylebot, it's fine as long as it lets me right click an element and have that element's name be pre-filled in the CSS: if then I have to manually set the CSS property, it's fine – assuming it previews them on-the-fly.

Now, I'm pretty sure there's nothing like that or I would have found it, but asking might bring unexpected results, and in future there might be an answer.

I want to keep the changes between reloads, so just modifying the CSS in Inspect Element is not sufficient.

Color That Site! is quite good: not as complete as Stylebot, since its only goal is dealing with colours, but since that was the primary reason I using Stylebot anyway, that's good.

Actually, as far as changing the colours, is even more feature-rich than Stylebot.

Not the answer you're looking for? Browse other questions tagged firefox css or ask your own question.

0
Simple note-taking extension for Chrome and Firefox
6
Syncing Firefox and Google Chrome Browser Bookmarks
4
Editor or plugin that allows CSS styles to be edited like they are in Google Chrome
1
Element remover for Firefox without context menus
1
Firefox add-on to store custom CSS on specific websites
3
HTML, CSS, PHP Portable Editor
2
Any Free Live Preview HTML, PHP and CSS Editor like Google WebTools?
4
SSB for Firefox? Like Prism or Epichrome?
1
Chrome or Firefox Add On / Extension for editing CSS number values with buttons or scroll wheel