How to recover data from old DVDs?

I have very important files (mostly videos) on my DVDs. But these DVDs are 3-4 years old and I have not used them in the meanwhile. Now, videos are not playable using the Windows Media Player, VLC, KMplayer.

Also, I could not copy them from DVD to computer; it takes so much time for copying, but stops in between.

So is there software available for Windows 7 to recover such data properly?

If you have a Linux machine available (if not, there are several Live distributions you could boot from CD/DVD or USB-stick), you might wish to take a look at DDRescue. That's a command-line tool using a sophisticated algorithm to create copies (clones) of "damaged" disks – either directly to another disk (e.g. if you have two drives available with your machine), or to an image file:

Depending on "damage level", creating the clone might take a while. But after that, accessing data from the clone should be as fast as it usually is from a "healthy medium". For your issue, you could create the clone as .iso file, and then burn that back to a new medium. Details can be found e.g. in the ddrescue manual (which also holds a small tutorial with examples in chapter 7 – see example #3 for CD/DVD recovery, but make sure to check the parameters used: you might not want e.g. the -n). Example command:

As in most cases with Linux and its tools, this solution comes fully free of charge (big plus). Several specific Linux Rescue distributions might even ship with it. Another plus: Using such a "live distribution", you don't even need to install anything to your computer for this. Examples for such Live Linuxes include Ubuntu Rescue Remix and SystemRescueCd. Further information can also be found in the Forensics Wiki.

It may well be that you cannot recover 100% of your data.

For videos, that might be acceptable, and you might only see a few visual glitches, if they are even visible. For things like spread sheets or word/PDF documents, etc, it is more problematic.

I have had success, under similar circumstances, with Unstoppable Copier.

Recovers files from disks with physical damage. Allows you to copy files from disks with problems such as bad sectors, scratches or that just give errors when reading data. The program will attempt to recover every readable piece of a file and put the pieces together. Using this method most types of files can be made useable even if some parts of the file were not recoverable in the end.

The program can be used as a daily backup system using its batch mode functions. A list of transfers can be saved to a file and then run from the command line to perform the same batch of transfers on a regular basis without having to use the GUI interface. The program supports command line parameters which allow the application to be run from schedulers or scripts so it can be fully integrated into daily server tasks

It is available for both Windows & Linux and is free.

It worked for me - here's hoping that it will work for you too.

If none of the above help and you really, really, really want your data back, you might have to pay for professional data recovery.

Dvdisaster is an open source program specifically tailored for imaging damaged discs. It can generate a copy of the failing disc, which you can then mount or analyze with common data recovery software (e.g. TestDisk).

It is mainly targeted to Linux, but versions for other operating systems are available.

This screenshot is from Wikipedia: 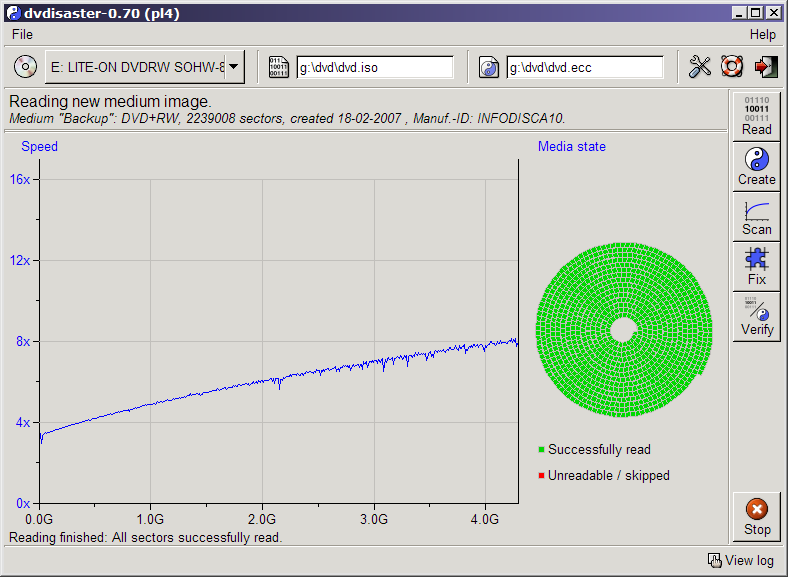 Note that Windows and MacOS versions are no longer supported (i.e. no more updates), but a fork is announced to pick that up. Meanwhile, the latest version for Windows can be downloaded here. A copy of the old 0.72.1 version for OS X is available on SourceForge in the form of a zipped .app bundle.

Not the answer you're looking for? Browse other questions tagged windows video optical-media data-recovery or ask your own question.