Lately one of my hard drives died.

I managed to save some of the data before the event because of S.M.A.R.T. and CrystalDiskInfo which showed about 2k reallocated sectors.

Now I have about 6 TB of data and not even half of that to make a full backup.

Since most of the files are available on the internet, I decided to backup only files that are not (private) or are important.

In the event that one of my HDDs dies again, it would be nice to have a list of files that I accumulated over time since I will definitely forget many of them.

So which programs can make a list of files and folders?

Some of the features that the program I like to have are:

I could never be sure of the files that I have saved that they have not been corrupted. That's why this time I want to also compute and save the hash for each file.

The size seems redundant if you have the hash, but if I have to download them again I can only check the hash only after the file is completely downloaded.

Files with hashes allows me to check over time the files are starting to get corrupted.

Until now I found:

Are there any other programs that can do this?

Also I havn't used it in a long time, HashCheck Shell Extension should do the trick.

For a picture is worth a thousand words, 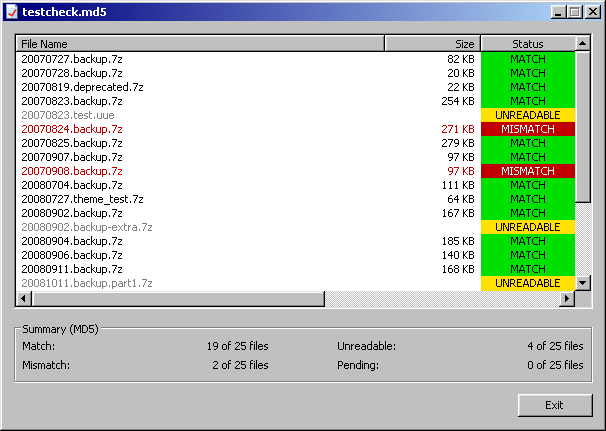 I am not sure if I got a complete understand of what you want, but I think this should work for you.

HashMyFiles is a small utility that allows you to generate unique file identifiers (hashes) using a variety of different popular tools. File hashes can be submitted easily via the tool to VirusTotal for malware analysis.

Formats supported include CRC32, MD5, SHA1, 256, 384 and 512. The various hashing information can be saved to a report (text/html/xml) that includes name, path, dates, file size, version, and other info.

Detailed Evaluation by someone: http://www.mnhs.org/preserve/records/legislativerecords/carol/docs_pdfs/HashMyFilesEvaluation.pdf 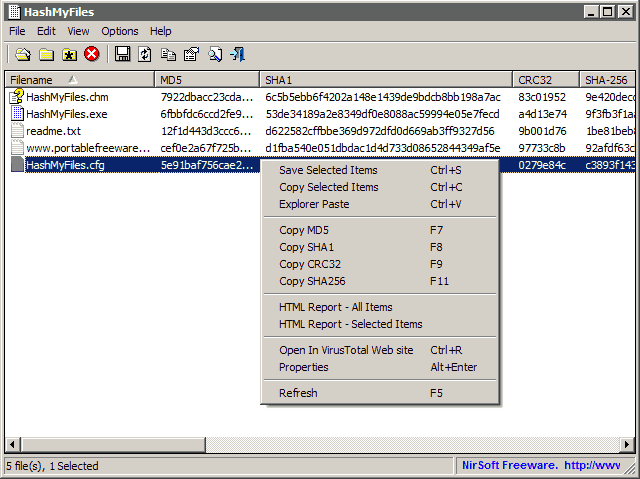 They have a huge bunch of amazing tools at NirSoft - First toolset that I put on a new machine.

Not the answer you're looking for? Browse other questions tagged windows-7 file-management backup or ask your own question.

4
What's a good backup tool to optical disks?
1
Backup software internal HDD to external hard disk
1
Tool/macro to make backups of Excel files
3
Which program can search and display multiple files, based on a list of file paths
1
List all files in a folder/drive as well as all sub-folders, recursively, hierarchically, and with folder/file size in Windows
3
Backup software with direct access to individual files
0
backing up specific files not all the sub-folders and directory
0
Differential backup on the cloud for a list of files and folders on Linux?