Linux software or website to turn Romaji into Japanese symbols

tl;dr at the bottom. The beginning is explaining why I need something different than what I've found.

The languages I normally use on my computer are English and Greek. However, sometimes I want to type in Japanese as well, without a Japanese keyboard.

On Windows this works well, as IME is just another keyboard layout. My primary OS is Linux though (specifically Mint KDE 17.1) and there are problems. It seems that the only way to use a similar method there is something that replaces the entire keyboard layout system, such as ibus or SCIM.

The above systems work well enough if I just want to use English and Japanese, but adding Greek to the mix causes more issues, as stresses stop working normally (they should work with dead keys, such as '+α producing " ά ", but instead if I use ibus or SCIM the result is " 'α ". Also, wanting to use a compose key is another problem, as the implementation depends on the default keyboard layout system.

I've tried ibus, SCIM and fcitx but none of the systems worked well with all 3 languages and the compose key. So I'm wondering if anything exists that would do the job.

Is there a piece of software that can turn Romaji into Japanese (primarily Hiragana and Katakana) in one of the following 3 formats?

linux japanese
Share
Improve this question
asked May 18 '15 at 7:52

DuckDuckGo has instant answer feature for that

Merged pull request of this feature 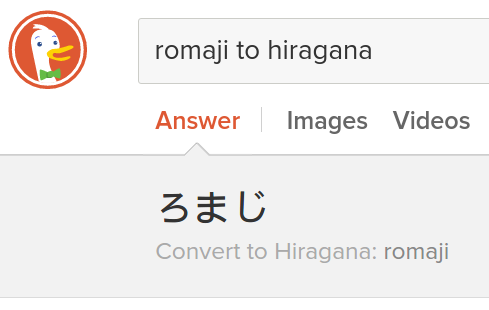 I've written a few sed-based filters for this purpose.

There is a perl module that seems to be capable of this - Lingua::JA::Kana. This alone would of course require some perl programming, but you may be able to find a premade script or program that utilizes this module. If I come across anything I'll be sure to post back.

Not the answer you're looking for? Browse other questions tagged linux japanese or ask your own question.