Free alternatives to Matlab that run on Linux?

I recently joined the folks using Linux. As a result, I'm trying to replace as much of the propriety applications as I can, with free — and if possible open-source — alternatives.

Since I need a decent tool for my math experiments and I used to use MATLAB R2013b on my former Windows install, I'm eager to learn about free — preferably open-source — alternatives to Matlab that will run on Linux (Ubuntu).

Are there any free alternatives to Matlab that run on Linux? What's most important to me, is that the alternative to Matlab should be a close-fit when it comes to syntax compatibility… so that most programs can be easily ported (or — if possible — imported). Also, I'm pretty sure no alternative will have the complete functionality set Matlab provides, so it would also be important for me to know what differences in functionality I have to expect when using the alternative(s) you suggest. Meaning: is there anything the free alternative(s) can do MATLAB R2013b can not do, and vice-versa?

There's no single replacement for Matlab in Linux. Matlab is really huge software package, including quite large library ecosystem.

Octave is one free alternative for Matlab. It's missing quite a few features, but all basics are there. I have used both, but it's rather hard to give good evaluation based on my own feelings. This page lists some minor differences, but mainly cases where Octave is better than Matlab. Probably the biggest issue is that some functions act differently, for example, product of booleans and loading empty files. This is important, as it makes porting your own scripts harder, as unexpected things happen.

My own feelings are that

That being said, Octave is free, and Matlab costs way more than average consumer can afford to pay.

Sagemath is another alternative, but it's closer to Mathematica in functionality.

For more do-it-yourself solutions, take a look at R, Scilab and Python. You won't get integrated, all-in-one package with these, and learning curve is rather steep.

as Olli said Ocatave is a matlab alternative:

There are also a few added features, but I've never found them noteworthy enough to remember them.

I would recommend Scilab as I have used it and found it to be a decent open-source alternate for MATLAB. It doesn't have the robustness and polish of a professional package, but since it's based on the MATLAB language, what you'll learn can be transferred later on if your needs change, or you find yourself working in an environment where MATLAB is the default.

Scilab is to MATLAB as OpenOffice is to MS Office. That is to say, it's a not-quite-a-clone, and it's not as polished. You do get most of the functionality of MATLAB, and the price is much more agreeable.

Take a look at Julia: http://julialang.org/

Julia is designed for numerical scientific work, including interactive work. It has a good quality notebook interface available like Mathematica and Sage. It has best-in-class performance, check out the benchmarks on the front page. It can call Python, which opens up lots of useful libraries for it.

Julia has been specifically designed to make the transition easy for MATLAB users. The basic syntax is similar. However, its programming language is more modern and advanced than MATLAB's (e.g. it supports metaprogramming).

Julia is a relatively new system, so it is not as complete as others (R, Octave), but it has a growing community and it shows a lot of promise.

If you don't need exact compatibility with Matlab, Freemat is an option. 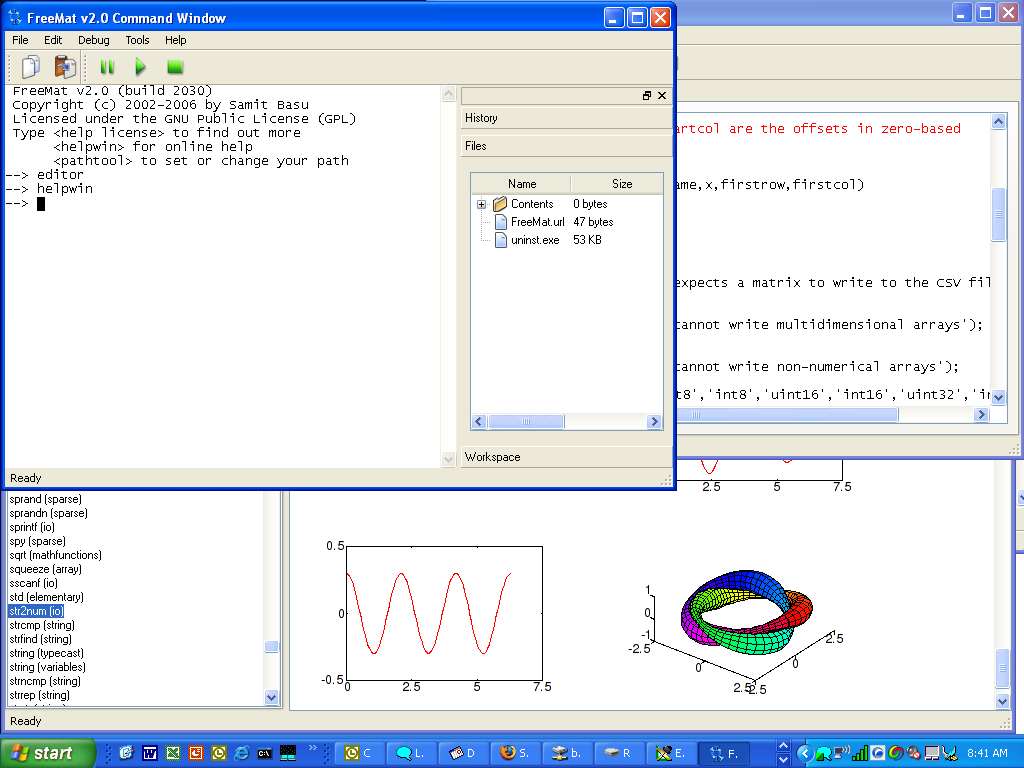 It can be quite fast, as it uses LLVM as a JIT compiler.

Freemat has had an integrated GUI for longer than Octave, although Octave's GUI has been getting better.

The main drawback is that it is not as actively developed as Octave is; the last release was in 2013.

Not the answer you're looking for? Browse other questions tagged linux gratis open-source math scientific-computing or ask your own question.

2
Is there any free, open-source alternative for MATLAB to do frequency analysis?