Is there any backup software that doesn't save to a proprietary file format?

I backup my data fairly reliably but three times I have been put into a situation where when the backup was needed the backup program failed and I was told the software was no longer being supported. The last time was in 2012 with the HP backup software that came bundled with my computer.

Having learned my lesson the first time I always keep a straight copy. Unfortunately, over time, this wastes quite a bit of memory.

Does anyone know of backup software that:

I have terabytes of external hard drive space where a good 60-70% is duplicate files because it's too easy to miss files with the brunt force method of incremental backup so each time I backup I do the whole thing. Simply because experience has taught me I can't rely on backup file formats to be accessible when needed.

The ability to tag and save previous versions of changed files rather than just replace during backup would be great but as long as it does 1 and 2, I won't be greedy.

I use FreeFileSync to sync my multiple internal hard drives with one large USB drive. Total data is about 1.5TB.

However, it will not backup multiple versions - you will only have the latest version on your external drive.

I use it for when I travel so I can still access all my files on my "pocket drive." One nice feature is that if I change something on the backup drive, it will sync back to my main drive. This is also configurable so if you do not want that to happen, you can make sure it only copies one way.

It exists for Windows, Mac, and Linux (I use the Windows version) and they regularly update it. Best of all, it is free.

Select a pair of folders and Bvckup 2 will make sure that one stays an exact copy of the other. It is light, uncomplicated and really well designed. It is also incredibly fast. 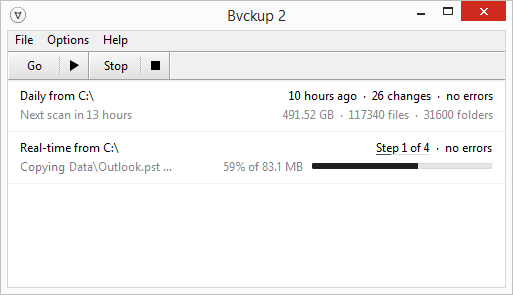 This does the equivalent of a copy/paste, and can also move deleted files to an "archive" folder. Unfortunately I don't think it uses this archiving feature if the files are merely changed (vs. completely deleted). I don't know if this fits your needs.

As far as performance goes I've successfully used it over the network to backup to a remote Samba share (on a Linux server), worked perfectly. This can of course also work with local files.

The stable version is paid (with a free trial) but the "beta" version is free and despite being a beta I've never had a single issue with it.

The file backup tool ViceVersa backups everything as Windows files and has a nice archiving feature where any deleted or overwritten files can be archived to directory. Archived files are regular files but with the name having the date and time appended. 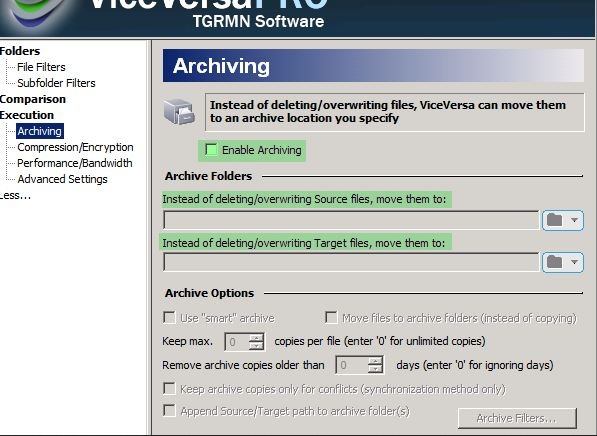 I have used KLS Backup with good results. It can either compress to standard ZIP or 7z formats, or simply copy over. Incremental and differential backups also work well in it.

My advice would be to look at macro editors instead of dedicated backup software. They give you unparalleled flexibility to duplicate files or folders to an external drive. My personal recommendation for a macro editor is Robotask (http://robotask.com).