Since I doubt that any such thing exists, I will keep the "requirements" to the program title. I give it a location & it gives me a route.

I doubt that even @Izzy knows of such a beast, so I will also welcome suggestions as to features & how to go about designing such an app (is there a routing algorithm to say "take me from here to here in about 5km"?)

Endomondo is a social activity tracking app. It has a web as well as mobile version (Link on Play Store). While it does not match your exact requirements, I think it meets the general idea in the question. You could use it to find different types of routes in an area. Here is a screenshot from the route finder on the website: 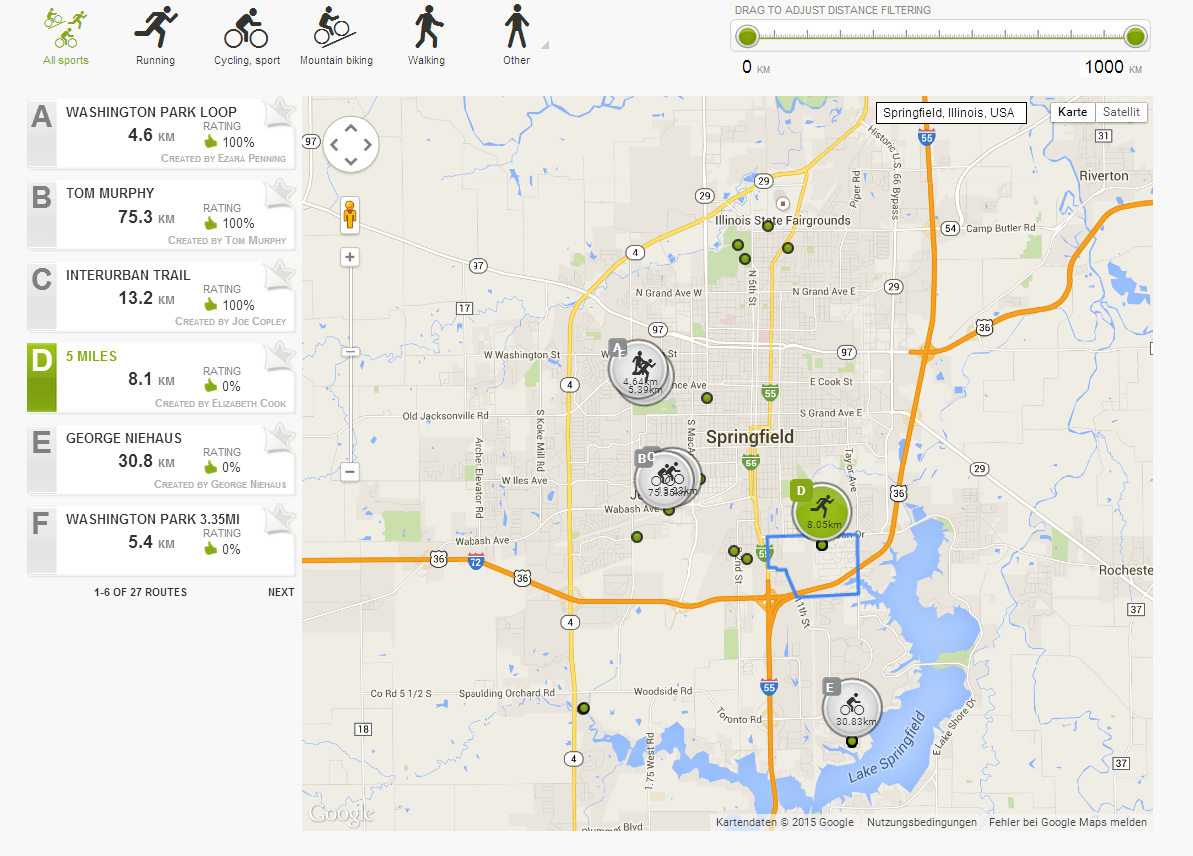 It's mostly based on user feedback, so the routes you see are the ones created and used by other users of the app, and the information available is based on the comments they leave.

Yes. This can be done through the slider bar on the top right. In the screenshot, the range is from 0 to 1000km, but both extrema can be adjusted

an option to use cycle tracks, or footpaths

Yes. You could choose the type of sport for the corresponding route, including walking and cycling

or to search for greenery, rivers, parks, woods

It uses Google Maps, which shows important landmarks in the searched area, but you cannot use greenery as a search filter

if I am daydreaming/designing the system that I will probably have to develop myself, maybe avoiding high crime/high traffic areas?

Not automatically. But you could see the popularity of each road through how many users have tracked it, as well as a thumbs-up / thumbs-down rating along with user comments

Not automatically, but you could expect a hill if you select hiking in the sports menu. And you could examine the terrain using the sattelite view

Another example would be MapMyRun, which offers a "Search Routes" feature based on user routes. Distances are at least some minimum and the routes are indicated with flags on a map to find those near parks, hills, etc.

They also have "Route Genius" which will automatically come up with route suggestions of given distances, including avoiding highways, direction (e.g., start to the N, go clockwise).

Since you can run either search multiple times, you'll be able to pick different routes that explore parks, etc. You can also indicate running vs. cycling to give some preference to surface condition. It does not address your other criteria.

Sorry to disappoint you, Mawg – but I've heard about more than one such app (you were teasing me, admit it! :). One of them is already in the answers (Endomo). As I haven't used any such app myself, I don't really feel "authorized" to write up an answer; but there are more apps alike. 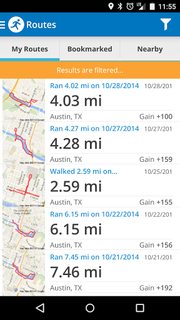 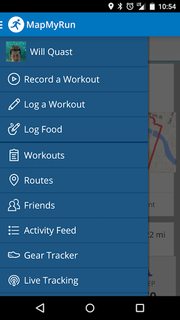 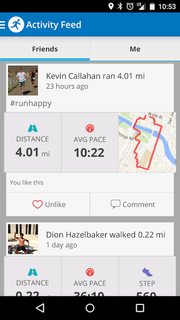 Looking at the right-most tab in the first screenshot suggests this app can show you "nearby routes", while from the description the source of this does not become clear (Edit: I've just noticed Geoff mentioned this in his answer, so maybe check with him on that). The other two screenshots show you can "befriend" other community members – so I wouldn't wonder but rather expect that at least "shared routes" from those "friends" should show up here. Just that that's nowhere mentioned.

Then there's also My Tracks, which explicitely mentions sharing capabilities:

My Tracks records your path, speed, distance, and elevation while you walk, run, bike, or do anything else outdoors. While recording, you can view your data live, annotate your path, and hear periodic voice announcements of your progress. With My Tracks, you can sync and share your tracks via Google Drive. For sharing, you can share tracks with friends, see the tracks your friends have shared with you, or make tracks public and share their URLs via Google+, Facebook, Twitter, etc. In addition to Google Drive, you can also export your tracks to Google My Maps, Google Spreadsheets, or external storage. 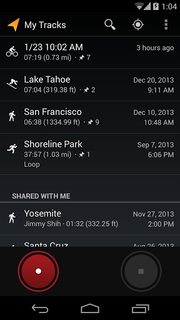 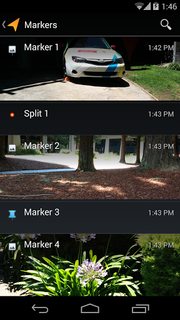 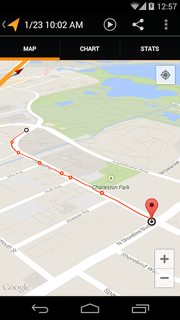 Again, I'm not sure whether this is a perfect match – as here it's not clear if it can show "nearby routes" directly, or if you have to check them out yourself. As the first screenshot shows, it has "shared with you" routes listed, but says nothing about a "central database".

All good things in life are... free, so let me introduce inViu routes. This app is based on OpenStreetMap – and explicitely mentions creating and sharing GPS photos, POIs, and travel routes as one of its features, route planning and recording as another one. Looks most promising in this context: 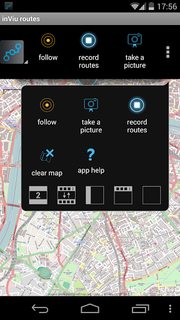 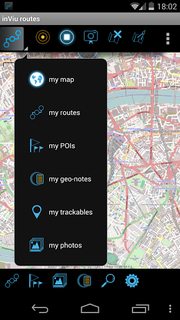 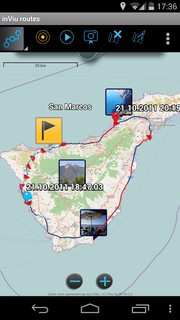 Not only can you track your routes; you can enrich them with photos and additional information, as all three screenshots show. Deducing from the map display (having multiple "colored lines" displayed), all available routes for your current location (or rather selected map range) can be shown right in the map. Again, I'm not sure whether routes must be explicitely shared between pairs of users, or if there's some "central pool" for "public routes" (rather looks like the former). I initially said "free", but there's also a premium version available via in-app payment.

Verdict: As initially stated, I've not used any of those apps myself – so maybe I should delete my answer before posting it. None of these apps seems to fit all the requirements (I'm sure I've seen such an app, just cannot remember it – will add it if I see it again). Still I hope you find it useful. If you think it doesn't match your question and really should be deleted, let me know ;)

I believe Strava meet's most of your requirements, other than the requirement of being able to say I want to see trees vs. buildings but if I recall right it knows if it is a dirt, gravel, or paved path.

A lot of their route technology from what I read is based on their users activity and they will suggest routes based on this detail. This way it can map trail systems and even tell what the actual route is vs. a perhaps map based on non-GPS methods. I would highly suggest checking out Labs.Strava.Com.

The application is available for Android and iOS.

Not the answer you're looking for? Browse other questions tagged android fitness or ask your own question.