Android app to list and manage programs' intents by program

I am using an app called Autostarts to manage Intents in Android.

The program does what it's meant to do, but to be honest, its UI is completely backwards from my main use case: it lists intents by event type.

My main use case is, however: "I see this program - 'NFL Mobile' - started when I didn't want it; probably through some obscure intent like 'Timezome changed'. I want to disable ALL intents that aren't needed for this program, without browsing to see which intents list the program".

Autostarts requires me to open ALL the intent types one by one and vgrep through long lists of programs in each, sometimes un-intuitively named. AND then re-do it all over again when an app update is installed.

I'm looking for something with features similar to Autostarts, BUT where I can get a full list of intents for a specific program I choose.

You definitly shoud take a look at Autorun Manager. I've tried a lot of tools here (including Autostarts), and ARM definitly turned up to be the best in my eyes: 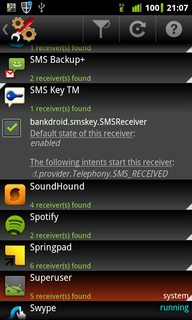 How does ARM meet your requirements?

To list all its great features would be too long here, but let me pick two outstanding ones:

So if you ask me: When looking for an app to selectively disable intents (aka "avoid apps starting on events where you don't need them"), ARM should be your first choice!

Disclaimer: I'm in no way affiliated with the app. Sorry if this sounded like an exaggerated advertisement, but I'm simply thrilled by this app! Moreover, the dev is very responding, be it when you think you found some bug, or need another feature.

UPDATE: As DVK correctly pointed out, I forgot to mention one "handicap": the free version is a limited trial, which only lets you make 10 changes (previous version had different limits). That's fine to figure whether it works at all, what it might find, and how it looks like – but most likely won't do for "real life use". The full version is available for currently about US$ 4, and has none of those limits. Having switched to the Pro version long ago, I totally forgot about that – so thanks for bringing it up, DVK!

A the second culprit DVK mentioned is The app startup time is very long - as expected - but the UI simply stays 100% blank and half the users give up thinking it crashed before that finishes. I cannot remember having had that whenever I used the app; so it might be device (or Android-version) specific. Moreover, once everything is set up, one rarely invokes the GUI anymore – so this might be relative.

4
Android app that detects changes in Intents being disabled