Up until a few years ago I used Microsoft Visio to reverse engineer an existing database to a diagram. This feature has been deprecated for a while now, and I'm rather stuck in finding an alternative.

The FAQ for this new SE site instructs me to be precise in the requirements, so I'll give my best. Most of these requirements were in Visio, though not all of them. I guess finding one piece of software that has them all is not feasible, but I'd like to get close.

Of course this question has been asked before, even on sister sites (with some success even though they're off topic there). Here's a few:

And slightly similar, from DBA.SE:

These are the things I've tried in passing:

And I think I may have tried a few suggestions from the SO threads, though I can't really remember specifics.

So: what would you recommend?

windows database modeling
Share
Improve this question
edited May 23 '17 at 12:37

Here's a recommendation I ended up using (after a lot more research and trying many different options):

Use plain Visio for this.

Explanation of this approach:

There is no tool that conveniently satisfies all mentioned requirements, not even one that fulfills the main requirements only. Visual Studio 2012 comes close, but lacks theming support and didn't work very well for a large number of tables.

The following process worked for me:

This is an example of what the end result looks like: 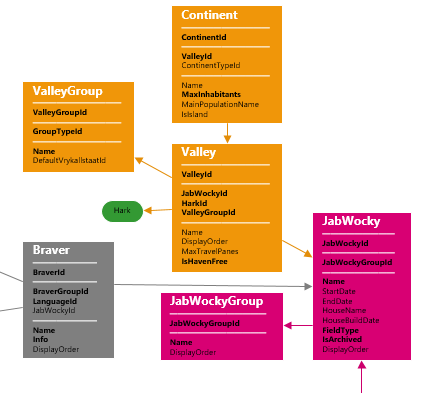 Or a zoomed out screenshot of the entire model (because it was manual labor I chose to include significantly less than all 100+ tables):

The procedure I used to make the "tables" look as they do:

In addition, I chose for foreign keys to:

Hopefully the above will be of use to others too.

Requirements from the question:

As a bottom line, I do recommend this approach, mainly because you end up with a visually appealing model and a high degree of control. This approach doesn't fit the entire bill though. Here's how it holds up to the requirements:

± This is all possible but not automated. So "more or less".

✓ Yes, this all works very well with plain Visio.

✓ AFAIK there's a free Office trial available. I haven't looked into this though as I have Visio.

✓ Yes, this is available in Visio.

It has about half of the bonus points:

1. I've also tried the UML template and shapes but this has infuriating behavior for connector routing. Not recommended!

Check out SQL Power Architect. It can connect to pretty much database that you can configure a JDBC connector for, and it can do all the reverse engineering that you are looking for. I only handles basic data types, though, so you have to convert things like DATETIME to DATE when you import them.

You can change the "Table Colour," but, in truth, that's really changing the color of the table's name/header than changing the background color for the whole table.

SchemaCrawler is a free, open-source database discovery tool that can reverse engineer your existing database.

Visio 2016 now has an add-in for the reverse engineering

I just had the same requirements as the original question, but Visio already had an advantage for our choice as the ERD diagrams were once generated via reverse-engineering in 2007.

Since, we already have Office 365 subscription Visio Pro was added to it, which gave me Visio 16 (released end of 2015). Then, we installed Database Modeling add-in for Visio to reverse engineer our database.

I used the add-in to connect to a SQL Server (2019) database using ODBC driver (but it has more options to select driver and server like Oracle or SQL Server Native etc),

P.S: If I were to start, without any advantage/preference for Visio as mentioned above, I would likely choose dbdiagram.io

Your list of requirements is fully covered by Lucidchart. Well, it's not free, but it has a free trial.

With Lucidchart you run a query that they specify, then import the query results. This creates a collection of tables that you can drop onto a diagram like stencil shapes. Lucidchart draws the connections between the keys of the tables you've chosen. You can rearrange the tables and connections, remove fields, change colors and fonts, etc. As far as I can tell, you'd save 90% of the time required for hand drawing in newer versions of Visio, and you get most of the flexibility in formatting. And no worries about typos. The downside is that this isn't a live connection to your database, so to refresh you'll need to do some manual work.

You can export to various graphic formats (PNG, PDF, JPG) and to Visio (VDX).

Note that none of the free or trialed tools listed above picked up linked keys for my db.

Not the answer you're looking for? Browse other questions tagged windows database modeling or ask your own question.