I often walk to work. Sometimes my wife will meet me part way. We always have to coordinate where I say I will be going down such and such a street and then turn here and go down another street.

It would be easier if she had an app on her phone that could locate my phone. I have seen numerous apps on the Google Play store, such as, "Find My Friends" or "Family Locator", but there are so many with so many features.

Have any of you used any of these applications that you could recommend?

I have been using the two recommendations since they were recommended.

This is a good app. Things I like about it.

Like kmort said in the recommendation, a nice bonus for this one is that you probably already have it on your phone. It does not have the features that Glympse does, such as showing direction and speed. It also only updates once per minute, which isn't helpful if one or both parties are moving. But for simple location sharing it works well. 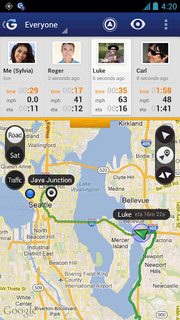 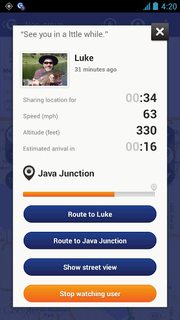 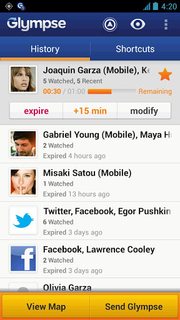 Disclosure: I've never used Glympse myself, but am eying it for quite a while already (hopefully I will find the time some day to check it out myself). But being an active member of multiple networks/forums, I've heard it recommended a lot. This, together with the good ratings the app receives at Google Play, makes it seeming save to be recommended here.

Recipients receive a link allowing them to view your ETA and location in real-time for the length of time you choose.

When the timer on your Glympse expires, your location is no longer visible. Best of all, recipients do not need any special software to view a Glympse. Send a Glympse via SMS, email, Facebook or Twitter, and recipients can view it using any web-enabled device. You can also send a Glympse to your Evernote account to save that journey.

An option is to use Google+. Once you have the Google+ app, go to Locations. You can customize who can see your current location very easily.

It's not as fancy as Glympse, but gets the job done, especially if you already happen to have it on your phone.

Not the answer you're looking for? Browse other questions tagged android geo-location or ask your own question.