tl;dr Is there any good software out there to help me organize my files? I have a ton!

I want to be able to organize my files once and for all. I have 20 years of files kicking around, some organized by date, some by type, some by whatever project I happen to be doing, etc. It's a big mess.

I have many types of files. Among them, Pictures, Videos, Music, downloaded binaries of many flavors, Visual Studio projects, perl, Java, web projects, word docs, excel, ODTs, church things, Scout things, craft project files, etc. The list goes on and on. At first I tried to organize based on "Phases" of my life:

This doesn't work well enough. Having parallel structures in my High School folder for on-the-side projects I continued in college seems silly. So I tried by year:

Still didn't get it all, and I ended up with a lot of "Misc" folders with unrelated items in them. Not helpful.

There has to be a better way.

What I decided is that I need to be able to organize my files using more than one folder hierarchy, but managed so there is no duplication where not needed.

What I mean is I would like to be able to place a file in a directory hierarchy structure such as:

and I would also like to navigate to these paths:

And get the same files. I don't want to duplicate the files, I want to have the folders I navigate to get to them be pointers to their actual location, seamlessly. (I know I could make Windows Shortcuts for them, but that's a tedious pain...) Basically, I want to be able to organize my files in multiple categories, have only one copy of them, but be able to find them via multiple directory traversals. (I understand I will have to do the initial work to categorize things, that's not the problem.)

Another example to cement the concept:

Another view of these same files would be:

Again, I understand I would have to do the initial filing of all these things myself. I'm just looking to see if there is a software product out there that can help me organize my files with multiple views of the same data. Does such a software product exist?

I've come across a phrase I didn't know before, and this may help: Faceted Search is basically what I want to do, but to do the searching, I want to traverse directories via Windows Explorer. Maybe it's not the right term, but it seems close to me.

Take a look at Elyse, a tag-based file manager. You can try it for free using up to 30 tags and the full version costs only $10. It's available on both Mac and Windows.

You've done a lot of thought about this, which will be good when you plan your tag taxonomy. Having a general organizational game plan before you start is hugely important. For example, you might want to start by creating a set of nested tags for the different overarching categories you mentioned, like life phases.

Here's a sample image of the Elyse interface. 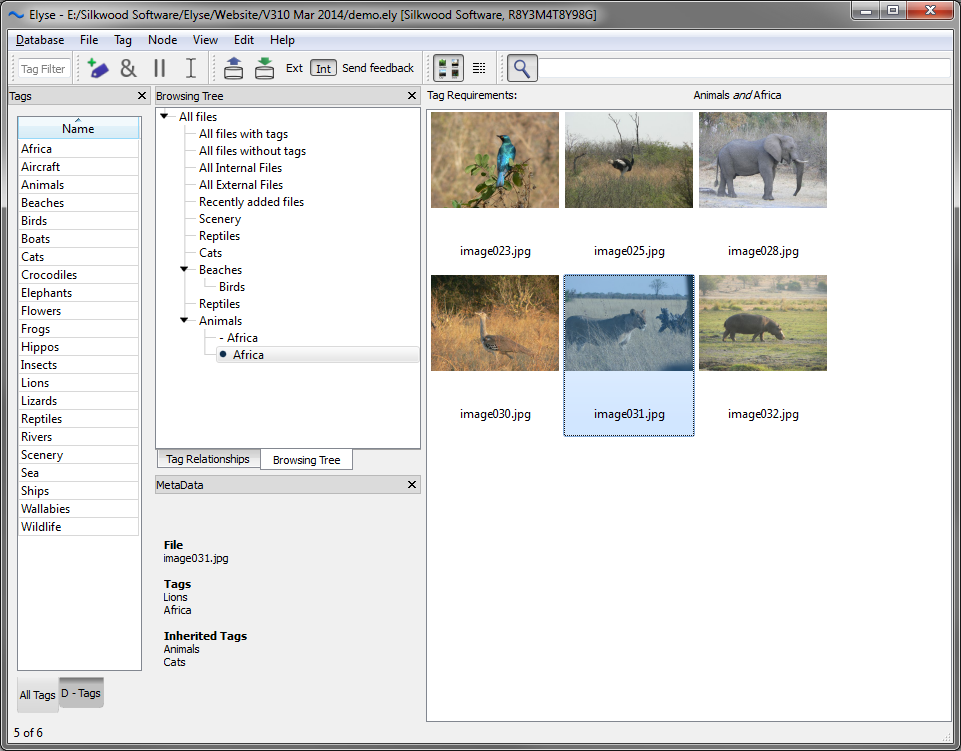 I find for the most part unless you have a specific need that organizing files is a waste of time. I recommend Everything Search which will pull up any file on your computer "instantly". Just type and it'll match on anything in the path, so it becomes trivial to get to what you want in moments. On Linux you can use 'locate'.

Put things in folders that are just enough to isolate small enough collections to find what you want in a reasonable time and that's all you need. If a folder starts getting a bit unweildy then make one or more subfolders to split them into groups. Otherwise don't bother.

Not the answer you're looking for? Browse other questions tagged file-management knowledge-organization or ask your own question.