Tool to cut an audio stream at song boundaries [duplicate]

I don't have access to my Internet radio at work (no streaming services allowed), so I stream the radio at home and end up with a huge file (Ogg Vorbis).

I like 90% of the music but 10% not and I would like to be able to randomize the playback, for that I would need to cut the large file into smaller chunks that separate at the beginning and end of a song.

Its okay if I need to select that start and end point manually but the tool must have a streamlined way of selecting part of the large file and producing a smaller file from it. Ideally overriding the larger file with a one that has the small part cut out.

I have a slight preference on linux and open-source but neither is required, I have access to all mainstream OSs. Easy to use interface (for my task at least) is a must have as I'm not a audio editing expert and don't aim at becoming one.

As I pay 50$ / year for the radio already I would accept to pay for the program as well, but as I'm not aiming at professional software it should not be too expensive.

Legal notice: This action is allowed by the laws of my country as long as I don't play the music publicly which I don't plan to do.

A few years ago I've used mp3DirectCut for cutting out short tracks from two hours radio shows and I found it really useful.

It does not reencode the files so you get the same quality as the original source has. It has a nice GUI where you can easily find the exact microsec where you want to cut. 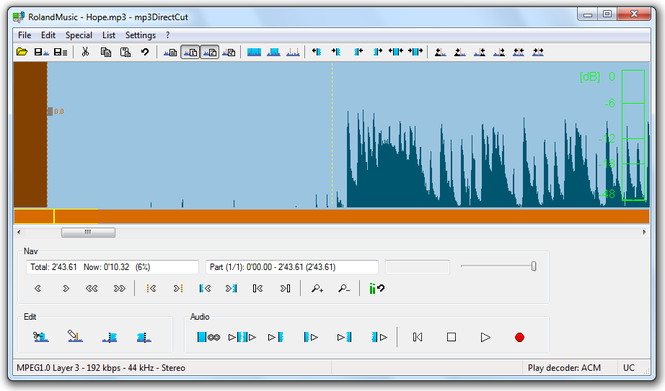 Its pause detection feature might save you a lot of time. (I don't remember whether it was useful or not for me.)

Unfortunately it runs on Windows (although the website says that it can be run with Wine in Linux).

As a music fan to a music fan I would recommend you have a look at http://convert2mp3.net/ , not exactly what you are looking for, but I believe it could be even more useful as you can just see your favorite songs on YouTube get the url code and convert them to an mp3. I personally love this link. I'm just not sure if the website is available in your location.

Not the answer you're looking for?Browse other questions tagged audio audio-editing or ask your own question.

16
Software to bleep a few words in a song
0
Software to seek through large audio file
1
GUI app to cut audio without (or with mininal) recoding
0
Library for Streaming Audio from Files
0
OGG file length fixing program (to turn OGG files with 1:45 audio length to correct length)
0
Sound editor for Mac to manually mix (crossfade) music files?
0
Audio editing tool where you can cut / trim an mp3 file directly, without re-encoding it?