I'm looking for a 3D Java physics library which would be effective for objects which are complicated yet locally ordered: by which I mean the object is made up of local axis aligned boxes (see screenshot). This is for a game in which players can create blocky spaceships of arbitrary shapes and the game works out realistic collision shapes (allowing you to walk around inside it etc).

The physics engine I am looking for would have the following 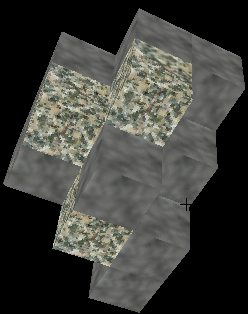 I know this is possible; in part because I have already written it, however my version is very bare bones and I would like to change for a somewhat more professional physics engine if it were to be available.

I have previously used JBullet (within JMonkey), which is a Java port of Bullet Physics, and while it supported this it was not optimised for it and hated it; grinding to a halt when two such objects were near each other.

Disclosure: I didn't try it, but I think this meets your criteria: https://github.com/tzaeschke/ode4j

It's a Java port of ODE, which claims to support collisions between most mesh combinations: https://www.ode-wiki.org/wiki/index.php?title=Manual:_All&printable=yes

My knowledge in this field and about your use case is too limited to say for sure, but this link contains a feature overview and a collision matrix that may help you decide if this does what you need.

Not the answer you're looking for? Browse other questions tagged library java or ask your own question.