Save stream from video grabber/capture device (2821)

Recently I bought a cheap video grabber device (2821 device). It did not ship with any software. This is a similar product: 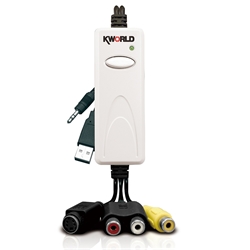 I am looking for a simple application which allows me to save the incoming video stream to an MPEG2/AVI.

Any of you have some experiences with this?

Although I haven't used below stated software for this purpose I think that they will work for you.

GrabBee - AV - user A. Koziol from amazon.com recommends this software.

BS.Player PRO has support for capture and tuner devices (and Teletext support) and for capturing video from capture device to hard disk.

If you're okay with command-line, and you're on Windows, you can try ffmpeg's "dshow" option.

First, run this command to see what DirectShow devices are available and what they are called:

Make a note of the name of your device (e.g. "Cheap Video Grabber") so you can use it in the next command.

If your video capture device only appears under "video devices", try this command:

If your video capture device appears under both "video devices" and "audio devices", you may need to specify that you want to capture both streams:

If you prefer AVI instead of MP4, just change "outputFile.mp4" to "outputFile.avi". There are dozens of other supported formats.

If you're still having issues with audio/video sync, ffmpeg has an option to let you introduce a delay into the audio or video stream to get them back in sync.

Not the answer you're looking for? Browse other questions tagged video streaming or ask your own question.