Is there a shell text editor that uses common keyboard shortcuts for navigation and editing?

I need the following features as much as possible:

If you are not fixed to these special shortcuts, mcedit might work for you: 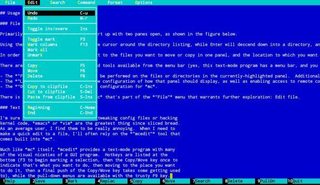 mcedit is part of the Midnight Commander file manager, but also can be used separately. I'm using it daily, and am pretty satisfied with it: it's fast, supports syntax highlighting, and you can extend it with your own specifications.

Let's see how it matches your requirements:

A bunch of additional possibilities, like jumping to a given line number, search (and replace), and copying to / inserting from a "clip file" (to move text between files) makes this a "round thing". To play at your nick: PHP syntax highlighting included (I use it frequently to edit PHP files) :)

Not the answer you're looking for? Browse other questions tagged linux text-editor command-line or ask your own question.