Revision graphs can become complex. TortoiseHg does a decent job of visualizing this, for example: 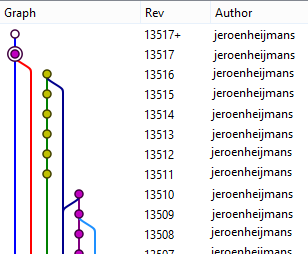 However, this is a bit too much detail to conceptually grasp how the various named branches do or do not share code. What I'm looking for is a way to visualize similar graphs, but then with these requirements:

Is there any piece of gratis software that fits my needs? Can TortoiseHg perhaps even do it? Or should I switch to another Hg GUI that has this?

With a little playing about TortoiseHg can do more or less what you are asking for by using the revset filter on the filter bar.

First ensure that the filter bar is visible by selecting in the view menu or pressing ctrl-S then in the revset filter try entering:

This should select a view of all the children and parents of those changesets that are either branch or merge points. I am sure that with a little more playing with changesets you can get more or less exactly what you need.

Sorry about the fuzzing but must respect confidentiality: