I am looking for an android photo management application that does the following:

I don't know what's "similar to Picasa", as I don't use Picasa. But for everything else, Monte Gallery should be a good match. 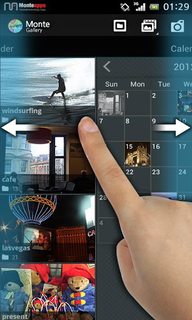 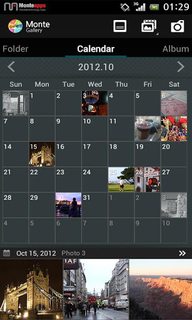 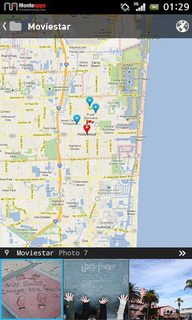 As above screenshots show, you can browse by folders or calendar (your "date" requirement). You even can browse by location (list not shown in screenshots), and have your photos shown on the map. Here comes a little "pitfall", though, as "by location" always goes down to street-level, and there's no possibility to group by any larger scale like "country". But as location-browsing was not listed with your requirements, I suppose you can live with that :)

Monte also supports tagging, and you can list your pictures by tags. But not only that: 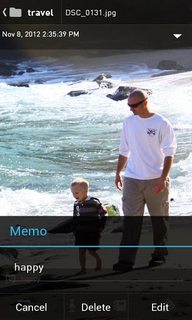 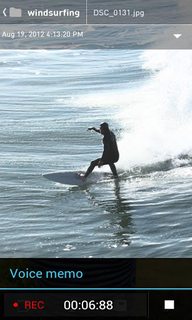 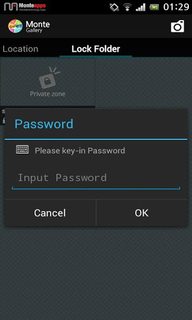 You can add text or voice memos to your images, or put sensitive once in a "safe". The app also features the calendar as widget (I never used that, though), and of course you can create albums (didn't try that either).

From your "bonus features", sharing is supported by the app. But is has no editing features.

I'd say the app is easy and intuitive to use. On the device where I use it, it sometimes takes a while until new pictures show up, and there's the "location sort" thing. But the former might well be device- or Android-version specific, and the latter won't affect you – so it should definitely be worth a try.

Oh, one minor thing, though: there is no gratis version available on Google Play. But the paid version is less than US$1.50, so it shouldn't hurt that much.

But it is not so simple to use because it does not use the album=folder metaphor.

Instead it can search photos by tag(s), date-range, gps-data, folder, filename... which makes it powerful but more difficult to use.

Not the answer you're looking for? Browse other questions tagged android file-management photography image-viewer gallery or ask your own question.