Video converter WITH option to use external codecs

I'm looking for a video converter which is able to use existing installed video codecs. There is a serious amount of converting programs using internal codecs, which is great, but this time it's not helpful. The program should run on Windows 7, and if possible, free.

My goal: I would like to edit videos where I will need to edit them in another program, but I would like to retain the original quality by using the Lagarith lossless codec and uncompressed PCM audio. I can't use the existing video because it wants an avi file, with no H.264 codec (I had installed the K-Lite codec pack and used Avidemux to convert the mp4 file container to avi, but then the application will crash after 50% loading progress). I want to avoid converting this video into a lossy format, unless it's perfectly safe to do so with certain settings. The final video is going to be a compressed video anyway, so I don't want to lose any quality before.

I have seen Sony Vegas is able to render videos using external codecs, but it's a way too much overkill, because it costs around 400$ and I don't want to edit it this way. Just a conversion. I have also visited quite a few other topics available here, but all these applications are using internal codecs. I have tested Handbrake, Media Coder, Avidemux, VirtualDub (unable to handle the avi after conversion from mp4 with Avidemux), TEncoder, XMedia Recode, WinFF and Super (built-in Lagarith codec, but can't convert without an error as well).

Thanks a lot in advance!

So, luckily I found something really great: FFInputDriver, a plugin package for VirtualDub. It adds the functionality to open up a lot more formats, not just avi. And I have seen that VirtualDub is able to batch convert like a video converter, so cool! I'm going to explain every step to convert videos into the Lagarith Lossless Codec: 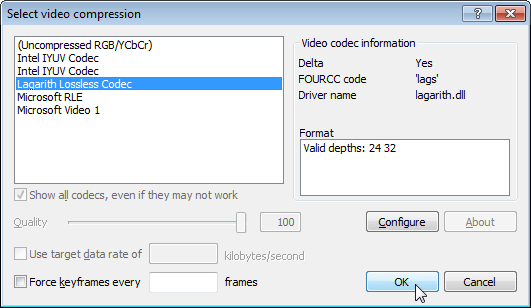 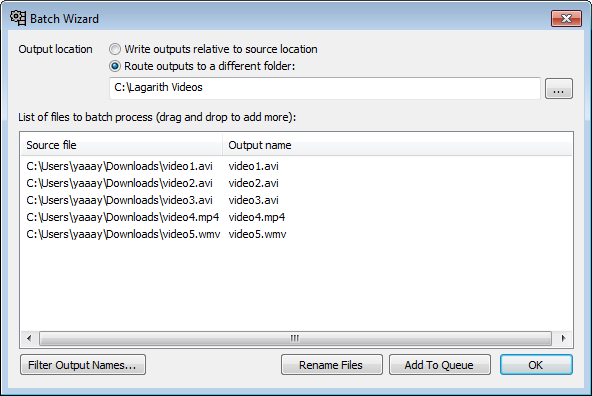 This is it, with no need for expensive video rendering programs! A small addition: With FFmpeg it's possible to change the file container without recoding the video, for example, into a mkv (Matroska container, it accepts Lagarith). But since others have explained this already, I will link to this. However, I would like to add that there is even a way to add FFmpeg into VirtualDub to save directly for example as a mp4 file. I didn't knew this before as well!

I'm happy with my solution, but there are very likely other or maybe even better ways, so if you know something, please share your knowledge by posting an answer. Thanks, and I hope this will help, especially to those for googling a way to convert videos into Lagarith!

Not the answer you're looking for? Browse other questions tagged windows-7 video or ask your own question.

88
Free, lightweight, all-in-one, audio and video format converter
6
Suggest a good video converter for Windows OS
3
Is there a free video converter that allows you to adjust color settings (filters) like brightness, contrast, and gamma?

18
Tool to split MP4 videos
6
What Windows software can I use to tell which codecs are used in a video?
6
What program will convert video frames to jpegs?
2
Gratis Blu-ray ripper for Windows
5
Software for converting MP4 to animated GIF
2
Software for video trimming and/or mkv to mp4 converting without any quality loss
0
Software to fix broken videos (MP4 and MOV specifically)