I frequently work together with colleagues on projects. To make it easy we create project folders (network drives) which contain all kind of information to the project. Often these are new product development projects. That means the project folder contains financial calculations, drawings in PDF format, excel sheets, images etc.

I was wondering what would be the best tool to track changes and notify me about changes in the project folder. I have little experience with SVN (which I think could probably do the job) and no experience with GIT (which I understand is superior).

There are a few caveats however:

So basically, these are our requirements:

The files are stored on a file server, not a shared directory of one on the work stations. I was thinking about a tool running in the systray which notifies me (only myself) about changes to the project folder - if possible with changelog.

Is GIT the right way to do that or is it unnecessary complicated - or is it really just a tool to track changes in code?

What would be the best way (tool) to track changes and keep me informed?

There are some challenges with what you've requested. First of all, anything that "monitors" files will need to be installed as a background service so it can run constantly -- this will always require administrative privileges. Secondly, requiring privacy usually also requires either your own server or a willingness to pay periodically for server space. Let's explore some options.

These do not track binary data files well, and only parse raw text. If you are using them to track files like pdfs or Microsoft Office documents, you will be able to know that a file changed, but not know what those changes were. Furthermore, you will lose all of the storage benefits that distributed version control systems offer, since the system will store binary dumps of each version of each file rather than differences. On top of that, since source code management usually needs to be done very intentionally, it won't be "automatic". You and your coworkers will need to manually add each file to the index, and remember to manually mark a file as changed and push the changes to a server each time you update a file. And if you don't have a server of your own, you will need to get one or pay monthly for a service like github (you will need to pay a fee if you want non-public storage).

Services like Dropbox often have version control built-in. Dropbox is even intelligent enough to generate exactly what changed in many proprietary binary data formats such as PDFs and Microsoft Office Files, if I'm not mistaken. Dropbox will also notify you to file changes in the form of a popup bubble in the bottom of your screen. Unfortunately, you probably will need administrator privileges to set this up on your workstation. Furthermore, there are privacy / security concerns with Dropbox: while your files won't be "public", per se, anyone with a direct link to the file can access it without authentication. This could hypothetically be a vector for cyber attack, if Dropbox's URL slugging technique were ever deciphered. Some Dropbox-like services actually use a peer-to-peer file sharing model, meaning there is no need for a server. This could be an advantage for privacy.

This is a proprietary system that's built-in to your operating system if you're using a recent version of Windows; that means you won't need to install it and won't need administrator privileges. If you're using Office 2013 or newer, it's tied into that as well. It is similar to Dropbox-like services. It has configurable privacy settings. It offers 15gb of storage for free.

For this use case, I suggest Alfresco.

Alfresco replaces your traditional Windows Share. It uses the same protocol, so the change is transparent for users. You can also access it via WebDAV, CMIS, and other protocols.

The Alfresco server is on your server (inside your network) so your critical information will not be sent to untrusted third-parties like Dropbox/Google/Microsoft.

Versions are tracked, you can lock files while you edit them. Recent modifications are visible on the web interface: 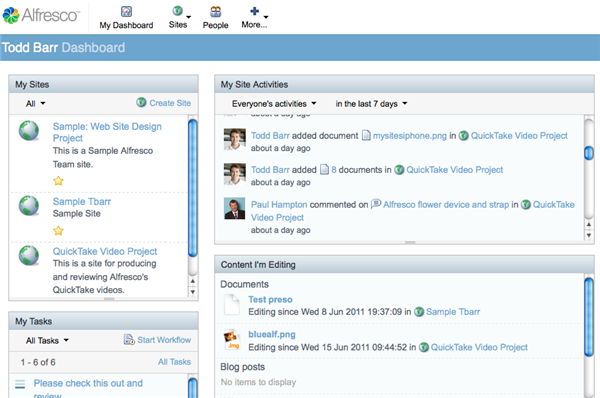 If this web dashboard is not enough and you really want a Windows tray notification, I suggest using a tiny portable RSS feed reader, and configuring this web script in Alfresco (I have never used it but according to the description it is a feed of recent changes, the same information as in the screenshot above).