I had an old Navman GPS unit and this shows the speed that I am travelling at based on GPS readings in addition to showing me navigation and routes. I have since discarded this unit and now I use Google Maps on my Android phone or tablet. However, Google Maps doesn't display the speed that you're travelling, which I find useful since the speedometer in my car is barely accurate.

Thus, I am seeking recommendations for software with the following features:

Changing out your entire navigation software stack to get a speedometer readout is like changing out you car because the rear view mirror fell off. The map data and navigation algorithms are far more important than such a tangential issue.

Personally I use DigiHUD and have been quite happy with it. I use both Google Nav and several Open Street Map based routing solutions depending on where I am. Usually I set the navigation to my destination get on the road using any visual clues I need, then switch to the heads-up display as this is more relevant than keeping my eyes on a map. Once I'm close and going slow again where the map is relevant I might pull it up again. The overlay seems to work fine and I have used in on several occasions as well. 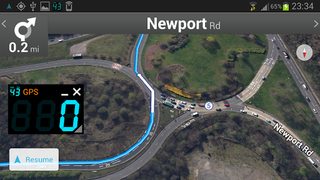 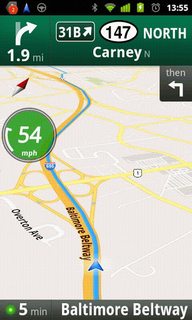 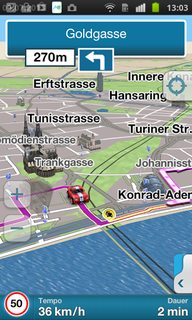 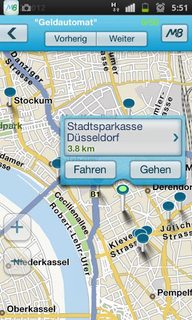 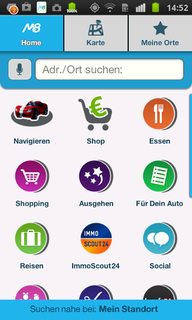 The first screenshot shows your "real-time speed" in the bottom-bar, including (turn-by-turn) navigation. As you can see in the second screenshot, you even can chose whether you want a "drive route" or walk, and search even includes different kinds of POIs. Real-time traffic is at least available for Germany, and includes warnings for fixed radar control points (the latter might cost extra).

Maps are based on TomTom material, so it shouldn't be that bad. This Android app even includes "social components" (Yelp, TripAdvisor, Facebook checkins for those who insist), and vouchers for nearby shops.

I have not used this app myself, but heard it recommended a couple of times by people using it. The app itself is free (for Android at least; can't tell about the iOS variant), but some of the additional features like radar warners were available for an extra fee in the past (according to the playstore page, they seem to be for free now at least in Germany).

It further looks like you need separate apps for UK and France (screenshots are from the app for Germany, which is the one I heard recommended).

You might like waze. In the apps settings a speedometer can be enabled. It'll also warn you about potholes and other hazards along your route. You get traffic updates from other drivers using waze and it's free.

Not the answer you're looking for? Browse other questions tagged android maps gps navigation or ask your own question.