Taking a picture with voice command on Android

I'm looking for a program that can take picture with voice command whenever I say "take a picture" (or some similar command) on Android. Free is better.

Whenever it comes to automation, the first thing I consider is checking Tasker – which is the automation app for Android. And allright, it supports this.

A little background in case you've never heard of this app (which I doubt): Tasker uses "profiles", which consist of two parts: Conditions, and Tasks. So you define tasks to be processed whenever a certain condition matches. Your action can be found in the Tasker UserGuide and is named "Take Photo". Your condition should be a voice command. While Tasker has support for that built-in, you'd get much more flexibility using the AutoVoice addon, which also offers a "continuous" mode (aka "Always Listen") if you wish. So some example profiles (pseudo-code, just the raw idea – you will need to finetune them):

This profile you need to setup only once, and then use it with many defined voice commands, like taking a photo: 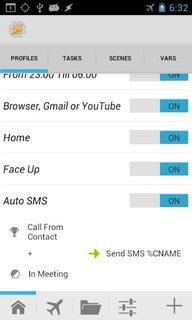 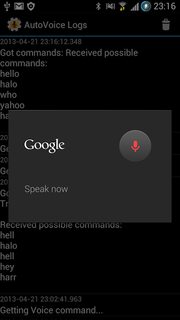 I recommend you taking a look in my Collection of Tasker Resources where you can also find several tutorials which help you get started with Tasker in general, and also specifically AutoVoice.

Not the answer you're looking for? Browse other questions tagged android camera voice-command or ask your own question.

4
Android picture privacy filter (via Share intents)
3
Android application to take pictures with good autofocus feature
7
Lightweight Android Gallery replacement to quickly select a picture for upload, without taking much memory
13
Android app that takes a picture every X second
0
Android or iOS navigation app that gives an alert when close to a speed camera in South Korea