Let's say I want to send a file from my phone to the phone of my friend (who is physically next to me).

I can't use the telephony network nor WiFi.

Is there an app to send the file anyway, using Bluetooth/NFC if available, or QR code video (sender's screen shows video, receiver's camera records and recognizes), or even audio. Or anything faster than might be available.

You might wish to take a look at my list for Filetransfer between two Android devices – I'm sure you'll find your candidate there. And I'm pretty sure it will be something like...

SuperBeam, which makes use of NFC (if available) or QR-Codes (otherwise) to connect two devices, and then uses WiFi-Direct for the transfer itself. So it's easy to connect – and much faster than Bluetooth: 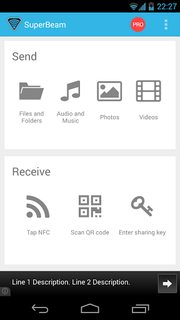 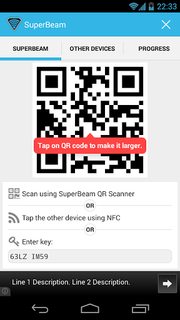 As the screenshots show, it's pretty easy to deal with: On the sending side, you select what to send and how to initiate the transfer – and on the target device (which also must have the app installed), you select the same connection method: either scanning a QR code, or hold the devices close to each other and use NFC.

It's possible to use SuperBeam on the sending side even if the target does not have the app installed – but that would involve a web service, and thus contradict your requirements. Speaking of which:

Bluetooth file transfer works for a subset of files for the rest you may need to rename the file to have an extension of .jpg, transfer it and then rename it back.