Up until Windows 8, Windows had a feature called "Briefcases" which would help you sync folders on your computer(s) with removable drives (and vice versa). This feature was removed in Windows 8. I know that you can get briefcases to work with Windows 8, but it is buggy and may be removed at any time, so I am looking for a 3rd party alternative.

Essentially, a briefcase would remember the paths and locations of any files/folders that you copied from the host computer into the briefcase. Then, when asked, would compare the files it has with the original files residing on the host machine. If there were any changes it would sync them onto itself, or provide you with several sync options in case of a conflict.

I need an equivalent that:

I would prefer not to have any fussy services/daemons/servers/etc running, but am willing to compromise on that point if needed. 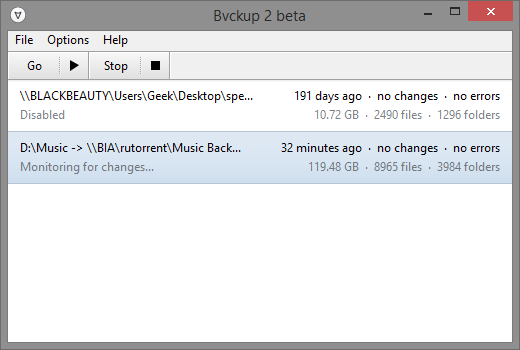 It used to be free (and I still run one of the last betas, I really ought to upgrade) but bvckup should replicate this functionality. You can set it to automatically backup and use 'device tracking' to identify a specific device - it'll pause till the device is detected.

It's tiny, does delta copies, recovers from errors, and does quite a few other shiny things. Considering I use it to back up and keep in sync slightly over a hundred gigabytes of small files, It works.

One issue is that it only does one way sync per job, If you want two way sync, you may need to set up two tasks to do sync

I use FreeFileSync. It matches most of what you've described:

Not the answer you're looking for? Browse other questions tagged gratis windows-8 file-synchronization usb or ask your own question.

2
Is there software for sync between folders in my laptop 'Data' drive and external HD?